Since the declaration of the coronavirus as a pandemic by the World Health Organisation, YouTube has positioned itself as one of the most user-consumed social video networks. In this context, advertisers have had to reinvent the way they communicate with their audiences through online video and adapt their digital content. In an analysis conducted by digital media company Divimove, ABC News, Netflix and Nike are some of the brands that have experienced the best development in terms of subscribers, while Apple, Coca-Cola and Nissan have achieved the most engagement.

Divimove’s ranking, based on data from YouTube and the Brand Finance Global 500 list, compared the subscriber count of YouTube’s most popular brand channels from the two months prior to the COVID-19 pandemic declaration and the period from March to April of the same year.

It classified brands that have witnessed improved performance during the crisis based on their increase in subscribers, engagement, published content and channel views.

Of all the brands analysed, the American TV channel ABC News recorded the greatest increase in subscribers, with a rise of +15.3% compared to the beginning of 2020 and a total of 9.04M subscribers at the end of April. It is followed by Netflix with an increase of +13.7% (total: 14.9M subscribers), reflecting the success of the platform during worldwide confinements. In third position is Nike, with an increase of +9.2% (1.4M), partly due to a series of home trainings launched at the end of March, also for a kids audience. Finally, the British TV channel BBC and the technology company Apple, complete the ranking with an increase of +8% and +5.6%, respectively. 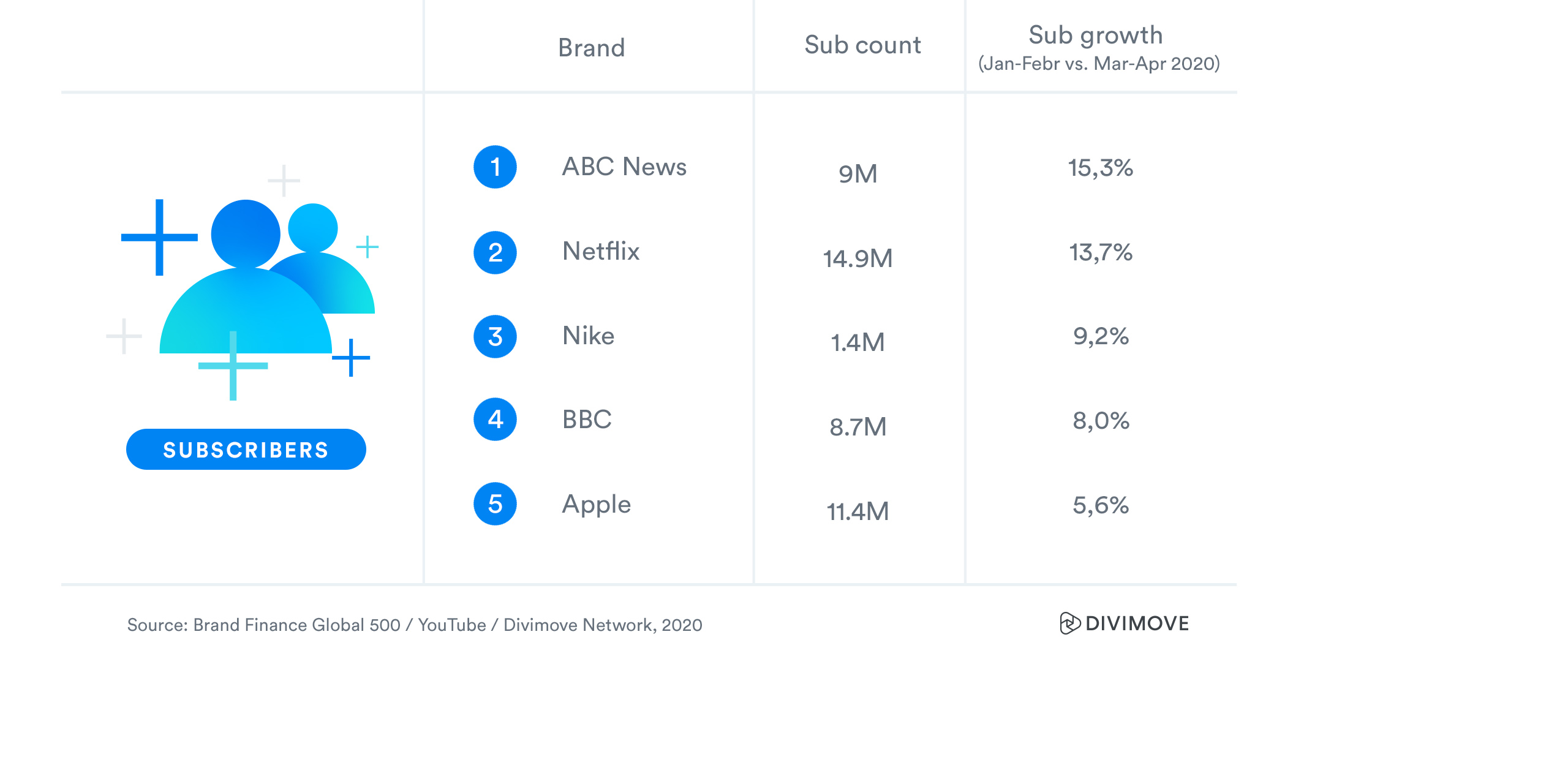 Apple and Coca-Cola, the most engaging

Regarding engagements in terms of likes and comments, Apple leads the ranking with a surprising increase of +226.3%. Although the brand keeps comments off for most videos, this increase is driven by the release of the promotional video for Lady Gaga's single ‘Stupid Love’, filmed with the iPhone 11 and the launch of the iPad Pro, in March 2020. In second place is Coca-Cola with an increase of +137% – a brand that has carried out an active media campaign to support those who have been affected by the coronavirus crisis. In third place is Nissan with an increase of +87.3%, followed by PlayStation (+46.7%) and Victoria's Secret (+15.2%). 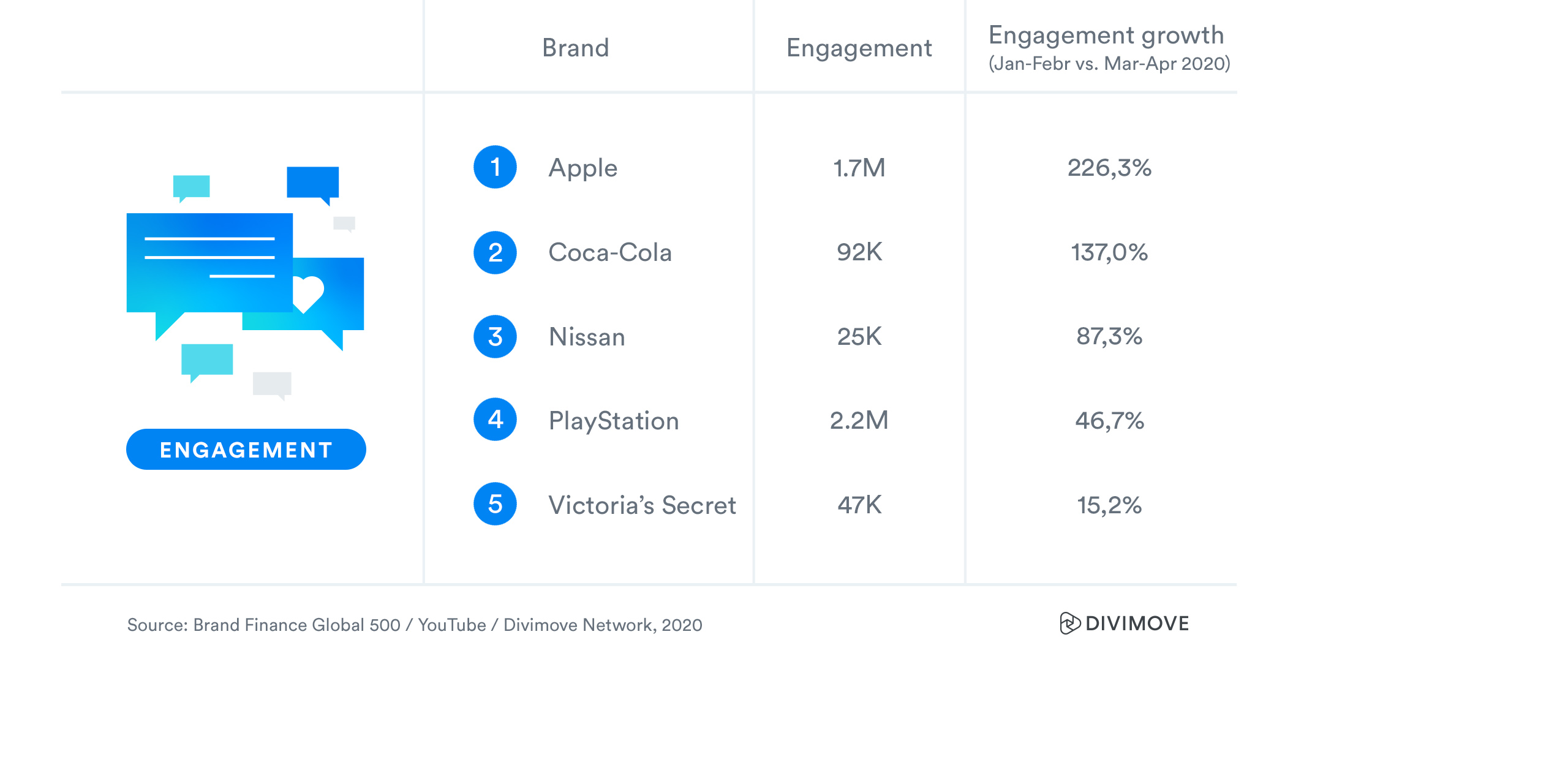 The most active: Red Bull and Adidas

With an increase of +130.8% in the publication of its videos, Red Bull is in first position after having published 30 videos during the period of March to April, followed by Adidas with a +130% increase and 23 videos. The new series from the sports brand, ‘The Huddle’, shows how well-known faces of the sport stay active during quarantine. The broadcaster BBC is in third place with a +73% increase, followed by Netflix (+63.4%) and Nissan (+41.4%).

Adidas and PlayStation are in the spotlight

In addition to the number of publications, Adidas also stands out in terms of views, which have increased by 662.5% during the confinement period. Behind them are PlayStation, with a +62.1% soar,at a time when the video game industry has broken records during March and April. Apple also achieved a considerable +59% increase, ahead of Nissan (+41.7%) and Pepsi (+30.8%).

One of the conclusions drawn from this analysis, when developing a digital content strategy on YouTube – is the importance of developing own formats, especially those that empathize with the daily life of the target audience, such as the creation of a video series. Similarly, it is key that when positioning themselves in respect to current issues affecting society -such as the coronavirus or the Black Lives Matter movement – advertisers should leave aside self-promotion and seek to connect with the user and their codes of behaviour through added-value creative content.

Finally, when it comes to allying with an influencer or celebrity, as was the case for Apple or Adidas, it is essential that selected influencers and their followers correspond with the profile of the brand's target audience, to ensure they can identify with brand values. 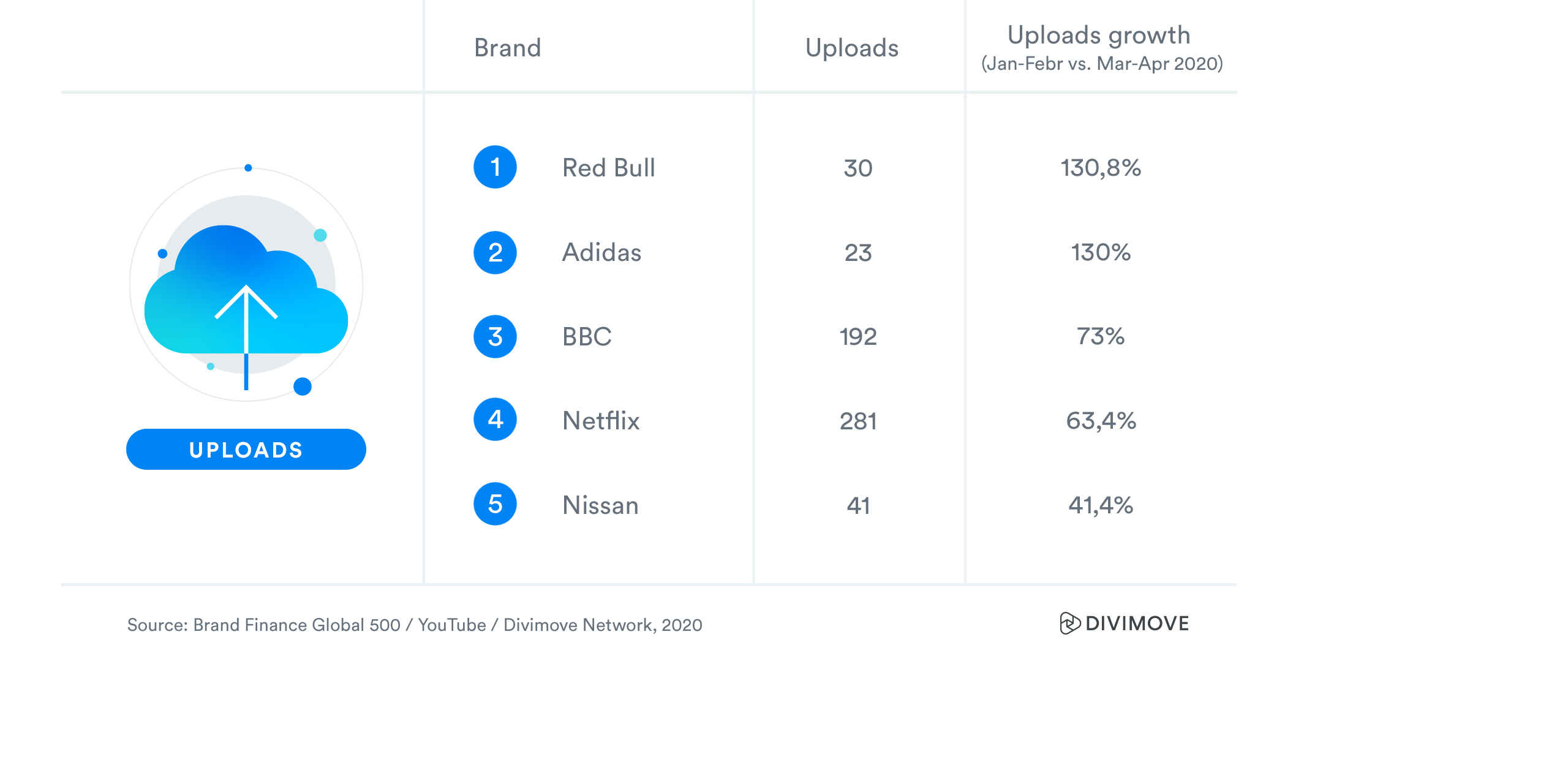 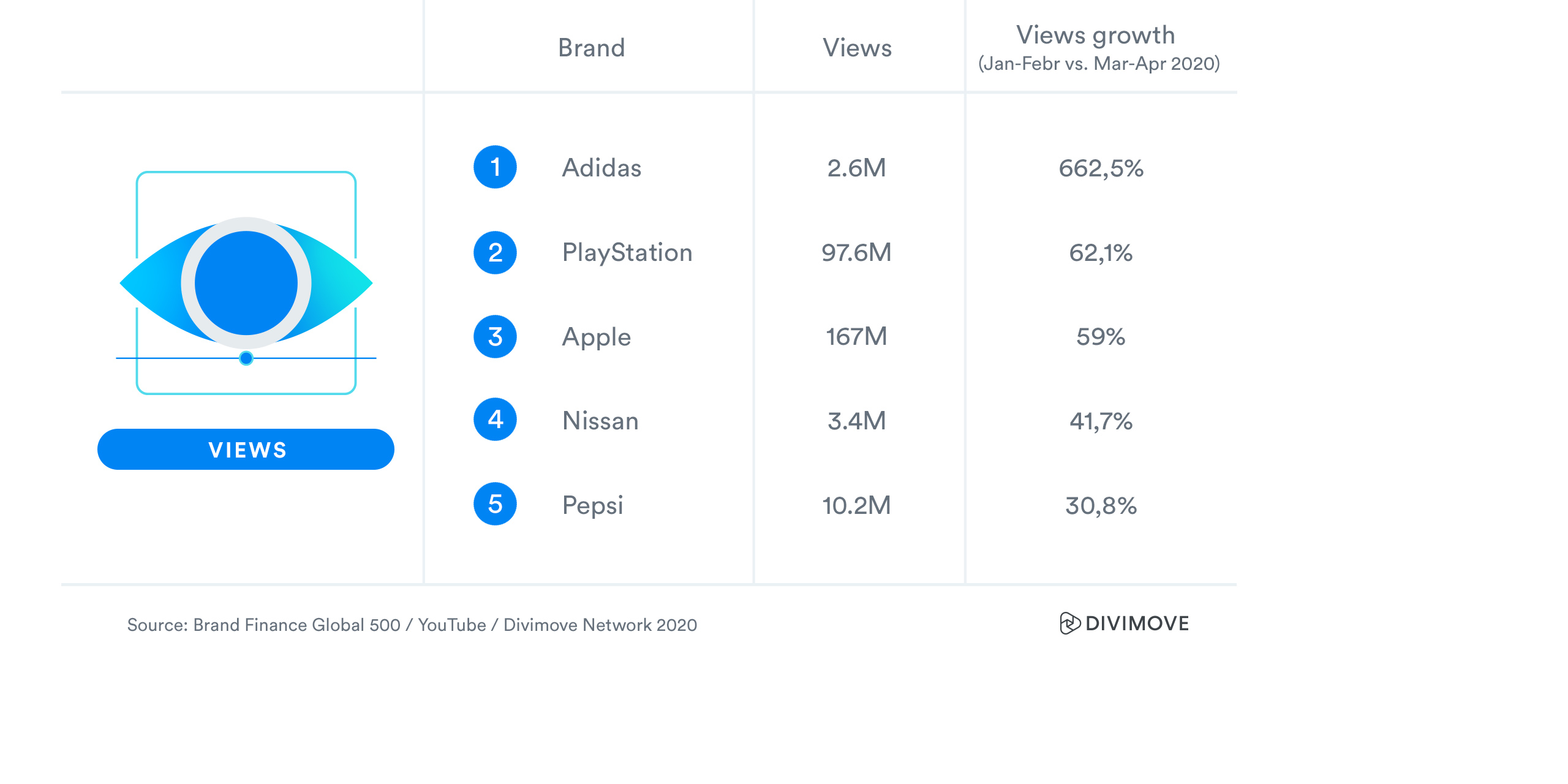