Online video is a more popular means of communication than ever before,so it is hardly surprising that over 90% of the most valuable global brands already have at least one YouTube channel of their own. Possible objectives include building their own communities and boosting their long-term reach. As another year draws to a close, Divimove, Europe's largest digital studio and talent network, has once again examined which brands and industries have made the biggest mark on the platform. As in 2018, the media industry led the way, averaging more than 4 million subscribers per brand channel.

For its data analysis, Divimove took a closer look at the 500 most valuable brands, as listed in the 2019 Brand Finance report, and began by identifying the five strongest-performing industries on YouTube. Reach was measured based on the number of subscribers, which can indicate organic growth more precisely than numbers of views alone, since some downloads may be attributable to paid media. For each brand, the corporate YouTube channel with the highest number of subscribers was included.

Media and entertainment sector comes out on top

Media companies reached an average of around 4 million subscribers through their YouTube channels in 2019, an increase of 1.5 million viewers compared with the previous year. The industry leaders were Warner Bros (8.06 million subscriptions), the BBC (7.61 million) and ABC News (7 million). The fastest growing media brands in 2019 were Fox News and CBS News, whose audiences were up by almost 70%. 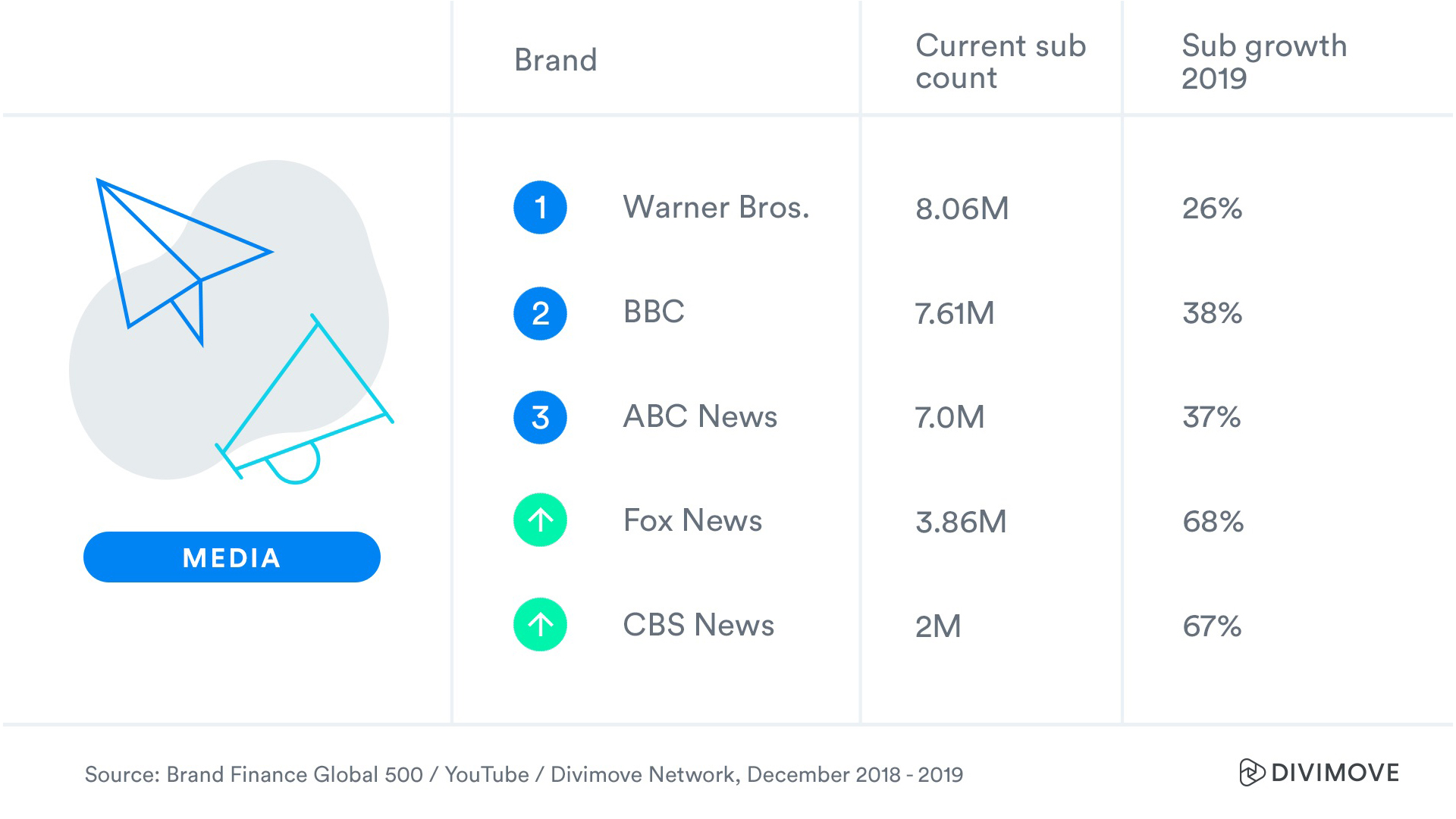 Netflix ahead of Apple and Playstation

With 11.8 million subscribers, Netflix took the top spot as the most popular tech channel on YouTube, ahead of Apple with 10.4 million followers and Playstation with 9.3 million users subscribing to its brand channel. HP and Tencent attracted the most new subscribers in the tech industry, up by 309% and 149% respectively. The average number of subscribers to tech companies' YouTube channels was 1.47 million (up from 740,000 in 2018). 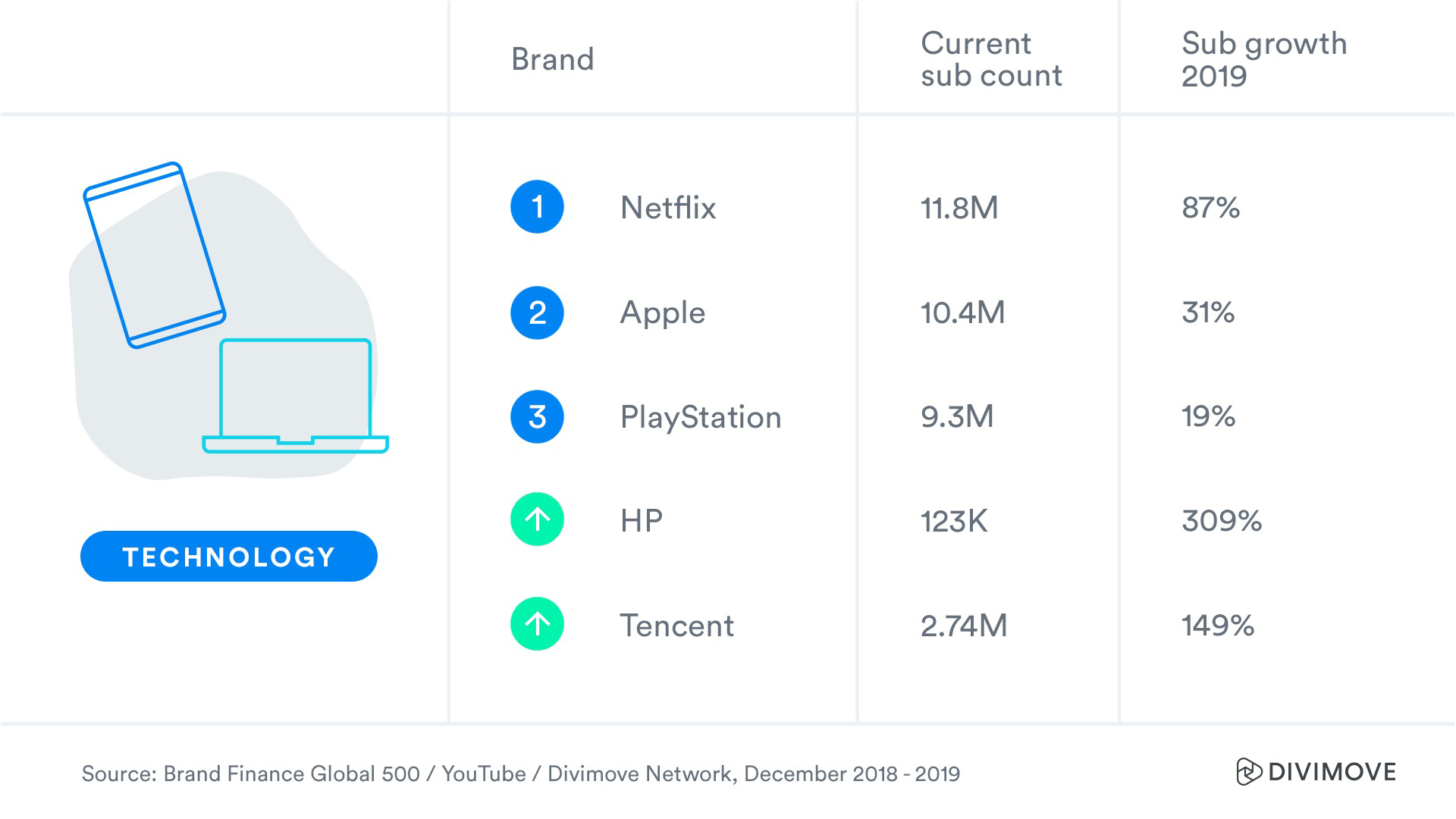 In the food and beverage industry, Red Bull led the brand ranking for the third year in a row. The Austrian company notched up 9.04 million subscribers on its own YouTube channel,well ahead of rivals Coca-Cola (3.28 million) and Pepsi (838,000). Subway's channel achieved remarkably strong growth in 2019, up 706%. Brands in this sector reached an average of 613,700 viewers, compared to 530,000 in 2018, making it the third largest branch of industry on YouTube.

US carmaker Ford in pole position

Once again, carmaker Ford came out on top in the automobile industry, with 2.04 million YouTube subscribers, followed by Mercedes-Benz, which saw 1.15 million viewers hitting the subscribe button. BMW dropped out of the top three for the first time this year, making way for Nissan, which secured third place with 1.09 million followers on the video platform.

Included in the Brand Finance report for the first time this year, andthus also in the YouTube brand ranking, Victoria's Secret took the number one spot with 1.83 million subscribers. Sportswear brand Nike attracted 1.23 million subscribers to its proprietary brand channel, ahead of competitor Adidas (870,000). Polo Ralph Lauren and Louis Vuitton saw the strongest growth in 2019, increasing their audience by 102% and 51% respectively. The apparel industry attracted twice as many subscribers as last year, 400,000 viewers on average.